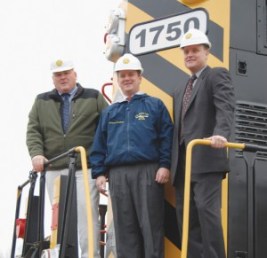 GRAFTON – Sen. Michael O. Moore’s column calling for reform of federal pre-emption laws that place railroads under federal authority instead of state and local regulations is as misguided as it is flawed.  If anything, taken together with the actions by the Town of Grafton, the column proves why pre-emption is needed more now than ever.

Contrary to Sen. Moore’s contention that pre-emption is a relic of the 1860s, the U.S. Congress strengthened federal pre-emption over state and local law in 1995 with the passage of the Interstate Commerce Commission Termination Act.  Congress did this in part because state and local governments were unduly interfering with rail transportation to the point where its future was in serious jeopardy.

Pre-emption also recognizes that railroads are not like other businesses.  They can’t pick up and move to another location like a retail or manufacturing operation.  For this reason, federal regulation broadly defines the terms rail transportation and rail carrier so that railroads may engage in related activities, such as building transloading facilities, without undue local interference.  The regulations take this posture because interstate commerce, the ability of goods and services to move freely among the states, is important enough to the US economy to be protected by the US Constitution.

More recently, in addition to finding that the Town of Grafton has no right to obstruct rail transportation, the unambiguous Sept. 19 unanimous decision from the bi-partisan, three-member federal Surface Transportation Board (STB) states quite clearly that contrary to Sen. Moore’s baseless allegation, there is no “third party” involved in the railroad’s attempt to bring a vital commodity to market.

The decision states, “…(the) G&U has provided evidence that the rail carrier and its owner intend to finance the project.  Moreover, the Town provides no evidence that another entity…” will be involved.  I’m sure Sen. Moore would agree that evidence should trump conjecture in a legal proceeding as well as in the court of public opinion.

The STB decision goes on to note that while the federal regulations govern the G&U, it must also follow state and local health and safety rules and regulations, something the G&U said from the outset it would do.  Had Senator Moore attended the federal court trial he would have heard testimony from the author of the national fire safety standard applicable to propane transfer sites as well as a highly experienced fire safety engineer that the facility designed by the railroad meets or exceeds all national fire safety requirements and standards.

The STB decision also noted the increasing demand for propane fuel, something Sen. Moore appears to know as well.  In fact, in October of last year, Sen. Moore attended a ribbon cutting and took no small amount of credit for helping Shrewsbury based Knight’s Airport Limousine Service convert their gasoline powered fleet to propane, which will be more cost effective and reduce carbon emissions.