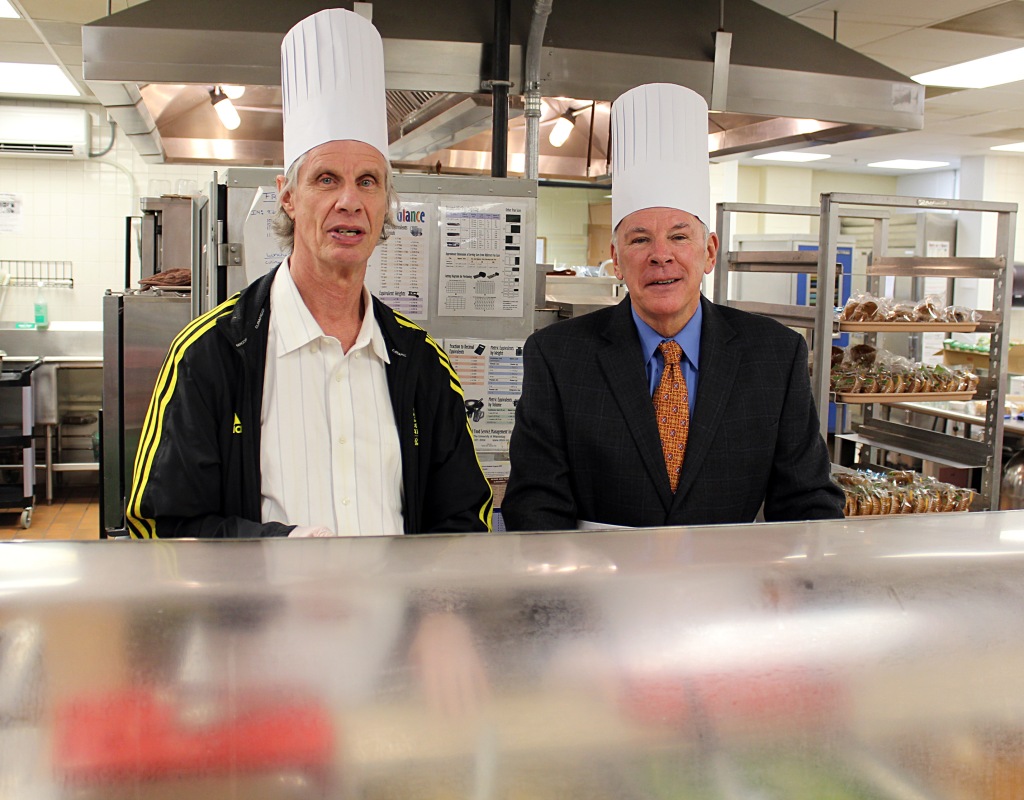 As the father of a Boston chef, Thompson took a special interest in the real-world skills developed by Culinary Arts students through their daily work in the Food Services department. Thompson was joined by Superintendent-Director Dr. Michael Fitzpatrick in serving lunch to the day’s first wave of Valley Tech students.

Far from a stranger to Valley Tech, Thompson has been covering the school as part of WMRC’s award-winning news programming for 47 years and regularly conducts interviews with Superintendent-Director Dr. Michael Fitzpatrick. Last month, rather than interviewing Fitzpatrick in-studio, Thompson visited Valley Tech’s Upton campus for an up-close look at student-learning in action.

“As a well-known radio personality, we welcomed Mr. Thompson,” said Fitzpatrick. “Frankly, we shall always take the time to provide any interested citizen with a tour of their Valley Tech investment.”

As with many Valley Tech visitors, Thompson’s tour involved the same hands-on learning utilized in the school’s shops and classrooms. In the Food Services department, Thompson joined the superintendent-director in donning chef hats and serving lunch to the day’s first wave of hungry BVT students. At the site of the school’s future Engineering Technology laboratory, Thompson examined the ongoing renovations being made by staff and student workers with largely donated materials, and even assisted the Facilities Department with the installation of several ceiling tiles.

The hands-on approach to his visit played an important role in WMRC’s continued coverage of the school, as Thompson looked to implement the reporters’ adage of “trust, but verify.”

“I wanted to see firsthand that what I’ve been told about BVT is being put into practice, and it is,” Thompson explained. “Nothing I saw here was new to me, or a surprise to me, but I wanted to see it firsthand. The kids were learning. They were having fun learning and I think that’s important because it makes them want to learn even more.”