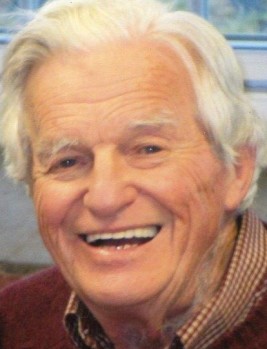 UPTON – David J. Benney, 85, of Upton, died October 9, 2015 in Countryside Healthcare in Milford after a period of declining health. Professor Emeritus of Applied Mathematics at the Massachusetts Institute of Technology and a world-renowned M.I.T. applied mathematician, he was the beloved husband of Elizabeth M. (Matthews) Benney.
Professor Benney was born in Wellington, New Zealand, the son of the late Cecil H. and Phyllis M. (Jenkins) Benney. He received a bachelor’s degree in mathematics (first class honors) from Victoria University in New Zealand in 1950, followed by a master’s degree in 1951. He studied at Cambridge University, 1952-54, receiving the B.A. in mathematics, again with first class honors. He returned to New Zealand as a Lecturer at Canterbury University College, 1955-57, before entering the doctoral program in applied mathematics at M.I.T.. After attaining his Ph.D, he was on the faculty at M.I.T. from 1960 to 2010, including ten years, 1989-99, as the head of the Mathematics Department.
David Benney was a dedicated teacher and mentor who had a remarkable ability to work effectively with Ph.D students. He mentored 18 Ph.Ds, made pioneering contributions to applied mathematics, and left an extraordinary legacy. He was at the leading edge in a paradigm shift in thinking about nonlinear wave systems in fluid dynamics. He not only realized, understood, and explained important physical phenomena, he also derived key equations that were relevant in a wide variety of contexts including aerodynamics, meteorology, oceanography, atmospheric sciences, and optics.
He served for 46 years (1968-2013) as Managing Editor of Studies in Applied Mathematics. Under his long tenure, he steered the journal to world prominence, making  it one of the best journals in physical applied mathematics. With Professor Harvey Greenspan, he co-authored the widely-used text, Calculus: An Introduction to Applied Mathematics, published in 1973 by McGraw Hill (republished by Breukelin Press in 1997).
In spite of such a distinguished and busy career, Dave always found time to spend with his wife and children. He loved to travel, ski, play tennis, and garden to excess. He tirelessly helped his wife with her horses, and maintained a sense of humor and remarkable modesty. His humility about his academic life was one of his greatest character traits.
In addition to his wife of 56 years, he leaves two sons, Richard Benney of Stow and Paul Benney of Bloomfield, CT; one daughter, Antonia Benney of Longmeadow; and two grandsons, Luke and Jon.
Following cremation, a celebration of his life for family, friends, and colleagues will be held at his home shortly. Arrangements by Williams-Pedersen Funeral Home of Upton (www.uptonfunerals.com).