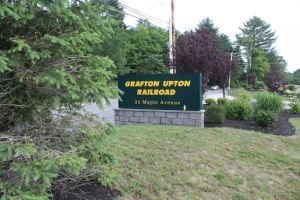 Seven Upton residents question whether operations at the Grafton and Upton Railroad (G&U) fall within the definition of transportation by rail.

In December 2014 the Surface and Transportation Board (STB) ruled in favor of G&U finding the operation of transferring wood pellets from rail cars to trucks at the Upton yard fell within “transportation by rail” and therefore would be preempted from local zoning  and other regulations.

The seven petitions appealed the STB’s  decision to the US First Circuit Court arguing preemption does not apply because the transloading operations at the Upton Facility are not related to transportation by rail but instead the vacuuming, screening, bagging, and palletizing of wood pellets is a manufacturing operation.

The US First Circuit Court of Appeals found value in their argument and vacated and remanded the December 2014 STB Declaratory Order.  “A remand is required to determine whether the vacuuming, screening, bagging, and palletizing facilitated the transloading of the pellets from the rail cars to the trucks or was done for solely another, unrelated purpose.” The issue will go back to the STB.

Upton Petitioner Diana Del Grosso said, “The Federal Court’s ruling is a welcome decision. We are pleased that the decision  stated in part that the Surface Transportation Board’s (STB) rationale used in determining the Upton wood pellet facility’s preemptive status was questionable, beside the point and sweeps too far beyond the statute.  We also concur with the Federal Court’s conclusion that the STB’s interpretation of rail transportation as applied to the wood pellet facility was defective and relied on an erroneous standard.  We look forward to the STB’s reconsideration of this case and are optimistic that when they properly review the facts, they will determine that the Upton wood pellet facility is not preempted and is therefore subject to local and state regulations.”

“Validation is important,” said Upton resident Verna Kosiba. “For years our fight has not been with or over the railroad.  The fight has been about sham and illegal operations that were being done in the name of the railroad,” she said. “From the beginning, our case has been that the pellet plant in Upton was not a transloading facility but that it was a manufacturing facility and as such should be subject to the laws and rules that govern manufacturing operations,” she said.

Kosiba went on to say, “We were not asking for money or damages, we were asking only to be able to sleep in our own beds at night without the noise and pollution that the pellet plant was and is causing our neighborhood.  We were asking that the pellet plant be licensed, inspected, and subjected to the electrical, plumbing, safety, noise, and other requirements of all non-railroad facilities.”

“Our hope and expectation is that, now with the court’s support of that argument,  state and local officials will be quickly and aggressively start enforcement proceedings.” said Kosiba.

Spokesperson for G&U Doug Pizzi said, “The G&U continues to believe that the pellet transloading activities do in fact constitute transportation by rail that is exempt from state and local permitting and preclearance regulation.  The G&U will continue to take all required steps to give the STB the necessary information that is required in clarifying this issue to the Court’s satisfaction.”

In 2012 the Upton Board of Selectman concluded the activities at the G&U Upton yard were preempted and did not seek to regulate them.