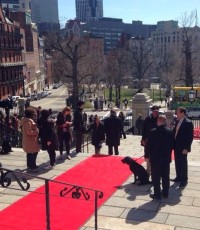 State Representative David K. Muradian, Jr., (R-Grafton) participated in a number of events March 29th-31st throughout the Boston area to welcome a delegation of officials from the Republic of Armenia. Among the members of the delegation were President Serzh Sargsyan, the President’s Chief of Staff Vigen Sargsyan, Armenian Ambassador to the United States Grigor Hovhannissian, Secretary to the Armenian Embassy Karen Israelian, and other officials of the Armenian government.

Included in the list of events that Rep. Muradian attended in honor of the President’s visit was a gala event at MIT on Tuesday, March 29th. The event was held by the Luys Foundation, an Armenian organization that promotes higher education, in order to celebrate 25 years of independence of the Republic of Armenia.

Representative Muradian joined a delegation of Massachusetts officials including Governor Charlie Baker, Lieutenant Governor Karyn Polito, Boston Mayor Marty Walsh, Secretary of Education James Peyser, Sheriff Peter Kotoujian and others, on the top of the steps to welcome the President to welcome President Sargsyan and his contingent to the State House via the ceremonial front gate.

As President Sargsyan arrived the Northbridge High School concert band played Mer Hayrenic, the Armenian National Anthem, while the Armenian flag was raised over the front lawn of the State House. The choir also similarly sang the Star Spangled Banner while the United States flag was raised. The President and the delegation then traversed a red carpet up to the Governor’s office where the parties exchanged gifts. Rep. Muradian gave the President a lapel pin with the American and Armenian flags crossed in friendship.

“It was amazing to welcome the President of Armenia to State House and to be able to have some time to speak with him about my Armenian heritage-something I am very proud of,” stated Rep. Muradian. “It was especially great to share the privilege of this experience with my father who was able to accompany me to lunch with President Sargsyan on Wednesday. I would also like to thank, from the very bottom of my heart, all of the Northbridge School Administration, especially Mr. James Verdone and the Northbridge music department for performing at the welcome ceremony; they did such an incredible job. To have Northbridge perform, given the large number of Armenians locally within the town, was certainly very special.”

Rep. Muradian and David Muradian, Sr. attended an event at St. James Armenian Church in Watertown to see the President speak to the congregation and a contingent of Massachusetts officials.

Thursday morning Representative Muradian once again joined a small delegation of state officials to welcome President Sargsyan to the John F. Kennedy Library and the Edward M. Kennedy Institute for a personal tour of the facility by Victoria Kennedy, the widow of the late Senator Edward M. Kennedy.

Following the event on Thursday, President Sargsyan and his contingent left for Washington D.C. where he will participated in the International Nuclear Summit.