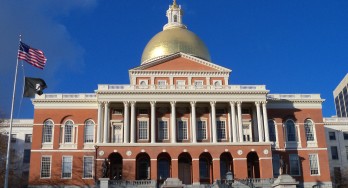 The first amendment would establish a Special Commission to review higher education salaries and benefits.  The amendment was filed in response to a series of investigative articles published earlier this year which highlighted funding practices for salaries, paid leave and other benefits provided to college and university leaders.  The efforts of the Special Commission will compliment an internal review currently being completed by the Department of Higher Education (DHE).

“I am proud to support the establishment of a Special Commission to review the possible inappropriate use of hard-earned tax and tuition dollars,” said Sen. Moore, who serves as Senate Chair of the Joint Committee on Higher Education.  “With the cost of attending colleges and universities at an all-time high, it is imperative to ensure that our students are not victims of fiscal irresponsibility.”

“With the rise of student tuition, and the burdensome weight of student debt increasing, it is imperative that we have a Special Commission to look into where our tuition dollars go. As a millennial with student debt, I know first-hand how hard it is to juggle debt after graduation. We need to understand where tuition fees are going, and ensure that there is no wasteful spending on any front,” said Sen. Fattman. “This Special Commission will benefit all members of the state, and hopefully will give us insight on where our dollars are going.”

The Commission would include representatives from the public higher education sector, and from a wide array of stakeholders and experts including the DHE, University of Massachusetts, Massachusetts Society of Certified Public Accountants, students, parents and the Massachusetts Office of Financial Assistance.

With a reporting deadline of March 1, 2017, the Commission would be charged with investigating higher education expenditures including employee-issued credit cards, expense accounts, vacation and sick time policies for management, salaries, bonuses, and stipends for management and professors.  The Commission would also be responsible for reviewing job descriptions of management positions, and the profits and endowments of each institution.

The second amendment secured by Sen. Moore and Sen. Fattman would provide financial assistance for children of public servants killed in the line of duty.  In particular, the amendment establishes a public service scholarship program for children of public employees and veterans who are killed in the line of duty.  The scholarship program will cover the cost of tuition and fees at Massachusetts public or independent higher education institutions.

“Our public employees and veterans make sacrifices for our communities and the nation on a daily basis,” said Sen. Moore “While nothing can replace a loved one, we have an obligation to assist the families of our fallen heroes who have made the ultimate sacrifice.  This amendment shows our gratitude by assisting the families at the worst time of their lives.”

“The loss of anyone in the line of duty is tragic. It not only impacts the communities where these brave individuals have served, but most importantly it affects their families. It is the very least the state can do to help the families of our fallen heroes. I am very proud to have co-sponsored this bill and I hope it makes an impact on the families of these brave men and women,” said Sen. Fattman.

Before reaching the Governor’s desk, the FY17 budget will go before a Conference Committee comprised of six legislators to resolve differences between versions of the budget passed by the Senate and House of Representatives.  The budget may be tracked by visiting the Legislature’s website, www.malegislature.gov.