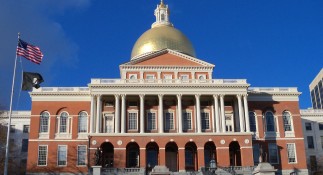 The Massachusetts State Senate took action to prevent sexual violence on college campuses by passing comprehensive legislation to codify and compliment federal requirements, and to establish new state-level policies for all higher education institutions in the Commonwealth.

The bill, filed by Senator Michael O. Moore (D-Millbury) who serves as Senate Chair of the Joint Committee on Higher Education, reflects a collaborative approach by college officials, advocacy groups, students and policymakers to address the issue of on-campus sexual assaults.

According to the National Sexual Violence Resources Center, one in five women and one in sixteen men are sexually assaulted while in college.  As of last month, there were 246 open sexual assault cases under federal investigation at 195 postsecondary institutions across the country.  Despite these statistics, an estimated ninety percent of students do not report incidents of sexual violence.

“As a legislator, and as a father, I recognize that there is more we should be doing to help prevent incidents of sexual assault on our college campuses,” said Senator Moore. “Through improved training, transparency and enforcement of policies, this bill supports initiatives that work to protect students, and ensure that postsecondary institutions are implementing systems that students can trust.”

“Sexual assault is a heinous crime no matter where it occurs.  Students who attend Massachusetts’ colleges and universities should be assured that their campus provides a safe, open, and caring environment.   This legislation provides the tools and training to our higher education institutions to help prevent sexual assault on our college campuses,” said Senate President Stan Rosenberg (D-Amherst).

“Local and national attention to sexual violence at institutions of higher education in recent years has brought this very real, longstanding, problem into the consciousness of the American public in an unprecedented way,” said Debra J. Robbin, Executive Director of Jane Doe Inc.  “This bill bolsters and provides additional supports for victims and survivors of sexual violence on college campuses in Massachusetts.  The local community based rape crisis centers and domestic violence programs in Massachusetts will be steady partners with our colleges and universities to develop and implement policies, practices and prevention efforts to create safe and healthy educational environments for all students.”

“We applaud the Senate’s passing of the legislation and urge the House to pass the same legislation and join the Senate in taking a significant step toward ending sexual violence on college campuses throughout the Commonwealth,” said Kim L. Dawkins, Executive Director of Pathways for Change, Inc.

Pursuant to a provision of the state’s Fiscal Year 2016 budget, the Department of Higher Education (DHE) conducted a comprehensive study of on campus safety and violence.  The report, which was released last month, provides many recommendations that further justify provisions of this legislation.

This bill requires all students and staff to receive mandatory annual sexual violence prevention and awareness programming as well as be notified, via email and on the school website, of the campus policies including information on the resources available to sexual assault victims both on and off-campus, and of the rights of the accused and the alleged victim.

In order to decrease the barriers that discourage students from reporting sexual violence, the bill also requires schools to designate a confidential resource advisor to serve as a liaison for students.  When requested by a student, the confidential resource advisor shall provide information on reporting options and the consequences of each of the options and coordinate with the schools to arrange academic accommodations and interim protective measures, such as changing dorms.

Because the lack of training of campus staff involved in sexual assault investigations often leads to negative results and experiences for the accused and victims, this legislation requires that staff responsible for participating in disciplinary proceedings will receive appropriate training to make sure they are knowledgeable about how to best approach these incidents.

Moreover, in an effort to promote increased coordination with outside resources and services, the bill requires schools to establish a memorandum of understanding with sexual assault crisis centers, as well as adopt policies that clearly outline the responsibilities and the sharing of information with law enforcement that is not in violation of state and federal laws.

In order to serve as a resource to schools by providing guidance on policies as well as sharing best practices, training opportunities, and other resources to enhance campus safety, the legislation would establish a campus safety advisor at the Department of Higher Education to advance state-wide campus safety initiatives.

The legislation, which passed the Senate unanimously, has now been referred to the House of Representatives for consideration.