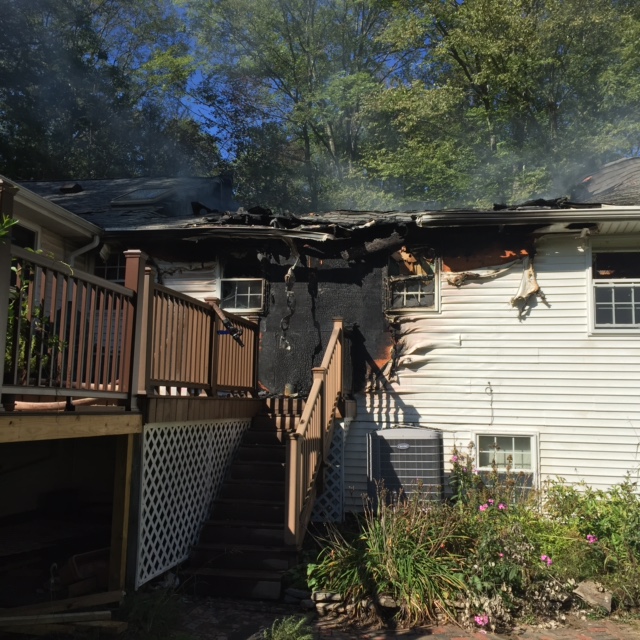 Rapid spontaneous combustion of rags used during a staining project on September 25 appear to have caused a house fire in Upton, officials said.

Upton Fire Chief Aaron Goodale said the department received a report of a  deck fire at a home on Grafton Road at 1:57 p.m. on Sunday. “We arrived quickly on scene to find a well involved fire that appears to have started on a rear deck and extended up the back of the house into the attic,” he said.

The roof structure failed very fast. Goodale said this was due “to the combined weight of solar panels on the back roof and the location of the fire.”

The occupants made it out safely with their three cats and two dogs.

One Upton Firefighter was transported to Milford Regional during the fire for an evaluation.

Goodale said there was extensive fire damage in the attic along with water and smoke damage throughout the first and second floor.

The department utilized water tankers to bring water to the scene as the fire was outside of the area of hydrants in town. Goodale reports there was no interruption of water used to fight the fire.

“Our staff along with our neighboring departments did a wonderful job bringing this fire quickly under control,” said Goodale. Hopedale, Hopkinton, and Grafton assisted and Northbridge covered the Upton station.

The family is not able to stay in their home and are currently staying with friends.

Goodale reports this is the second fire the department has responded to in the past few months caused by spontaneous combustion of stain soaked rags; in this case the rags were used that morning.

“Residents should use caution especially when using oil based  stain products,” said Goodale. “I encourage residents to follow the safety recommendations outlined by the manufacturer on the label.”

Spontaneous combustion can occur rapidly. “If in doubt residents are encouraged to soak rags in water and store them in an air tight metal trash can with a metal lid like the type used to store fireplace ashes,” Goodale said.

The following neighboring communities assisted Upton with the fire:

Hopedale – Engine and Water Tanker to the fire

Hopkinton – Engine and Water Tanker to the fire

Grafton – Engine to the fire

Westborough – Ambulance to the fire scene