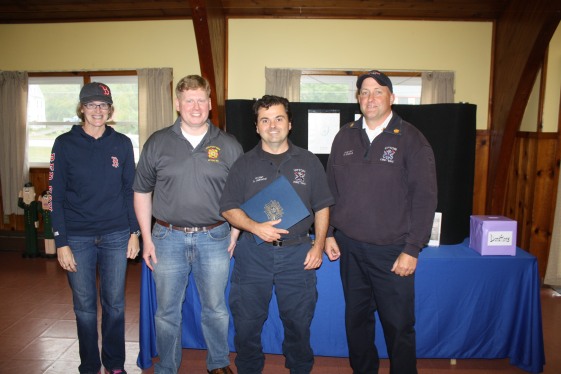 Local police officers and emergency services personnel were honored during a cookout held by the George Lincoln Wood Post 5594 on Saturday, October 1.

Commander Shawn Craig said the Post is working to connect more with the community and he was pleased with the turnout. “The weather wasn’t the best today but we had a great turnout,” he said.

In addition to honoring all first responders the post also held their inaugural Certificate of Appreciation Ceremony. This year’s recipients were Officer Carl Ambrosino and Firefighter/EMT Anthony Cervassi.

Each year, the Veterans of Foreign Wars selects emergency medical technicians, law enforcement and firefighter personnel to receive the VFW Public Servant Awards. Local posts will submit nominees to their Departments which in turn will forward the name of a single candidate for each award to VFW National Headquarters.

“Officer Carl Ambrosino and Firefighter/EMT Anthony Cervassi were nominated by their respective departments for the prestigious award,” said Craig. “We felt the need to recognize them today at a more personal level for their professionalism and dedication within our community.”

Officer Ambrosino was recognized for his “unyielding adherence to the highest ideals of law enforcement in maintaining, preserving, and protecting the lawful rights of citizens.”

Craig praised Officer Ambrosino for his work in the community and the relationships he has built with both BVT and the Mendon Upton Regional School District as the school resource officer. Ambrosino has been with the Upton Police Department for 27 years. Prior to his law enforcement service, Officer Ambrosino served on active duty in the United States Army.

Firefighter/EMT Cervassi was praised for his “alertness, personal courage, and ever efficient guardianship of life and property.”