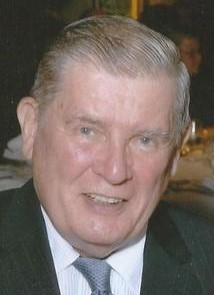 Robert G. Baker, 88, of Lincoln, ME and formerly of Upton, passed away unexpectedly October 20, 2016, at his home. He was the husband of Dawna (Pickering) DeMarey‑Baker.Born August 1, 1928, in Scranton, PA, he was the son of the late Pauline (Behrens) and Guy Arthur Baker. He was a graduate of Rutgers University and had a long and satisfying career as a financial advisor. Since moving to Maine in 2011, Bob was a member of the Lincoln Congregational Church Men’s Club and also served on the Planning Board for the Town of Lincoln.

In addition to his wife, Dawna, of Lincoln, he is survived by three children, Susan Goodridge of Atlanta, GA, Mark Baker and his wife Lynne of Melbourne, FL, and Andrew Baker of Danvers, MA; five grandchildren, Elizabeth Young, Benjamin Goodridge, and Eric, Alec, and Remington Baker; and several great‑grandchildren. He was predeceased by his wives Pauline (Dearborn), who died in 1987, Dorothy (Timmers), who died in 1994, and Gwendolyn (Beard), who died in 2005.

Private services will be held at the convenience of the family in the Williams-Pedersen Funeral Home of Upton. Burial will follow in Lakeview Cemetery in Upton.

Instead of flowers, the family suggests that memorial contributions be made to the Lincoln Regional Food Cupboard, 32 Park Ave., Lincoln, ME 04457.