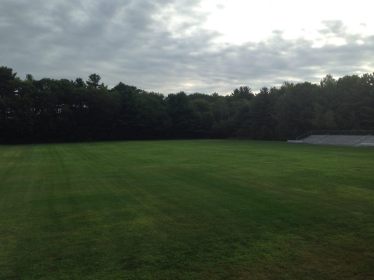 It’s exciting news for Nipmuc HS Football players and fans.  Thanks to the newly formed Nipmuc Gridiron Club, plans are underway for home games to be played at Nipmuc High School’s front field.

This is truly great news for the community. Can we all say Hurray for Nipmuc!

The Nipmuc Gridiron Club’s main goal was to fund-raise for new uniforms and to get Nipmuc football moved to the Nipmuc Campus.

Club President George Morrice and member Lisa Hilton recently presented the change to the Regional School Committee. Morrice pointed out why Miscoe was not ideal for high school football. “There are not a lot of stands, I don’t know if it (the field) is ADA compliant, the field was in poor condition,”  he said.

“We are trying to create something here. Football is a sport that can help grow spirit,” said Morrice. “We lose a lot of kids to private schools and BVT. We would like to see them stay here. By having the games at the high school we can help grow that here in Mendon Upton,” he said.

The dimensions of the front field were not an issue for supporting a football field.  Portable field goal posts will be used and nets have been set up to stop kicked balls from leaving the field area. “We were able to work with Principal Clements and the new Athletic Director (Christopher Schmidt), I think we came up with a viable plan to get games here at the high school,” said Morrice.

Nipmuc Gridiron Club raised $10,000 to purchase new uniforms for the teams and secured a donation worth $8,000 for a score board to be used at the field for all sports.  The club hopes to have a press box and concession stand in the future.

Superintendent Dr. Joseph  Maruszczak said, “I think this is a wonderful convergence.  At Chris’ (athletic director) final interview with me he spoke with a lot of passion about bringing  a real sense of school spirit, enthusiasm, and student ownership to the athletic program here at Nipmuc.  I think that echos what George and Lisa are doing here.”

“Football is huge…Friday Night Lights is huge, the way the community would come together. I see this as a real positive step in the right direction,” said Maruszczak.

Nipmuc High School Principal John Clements thanked Morrice and Hilton for their hard work and efforts. “Its a real example of what active parents can accomplish. Thank you very much. We appreciate this,” he said.

Morrice said, “The first home game is going to be BIG, we have some ideas to make it memorable. Come support the boys and the cheerleaders.”