Jazmin Wentworth of Millbury, Sydney Blaney of Milford, and Christopher Coley of Upton formed Team Dr. Chili Pepper and put together a non-traditional entry in the form of Chicken Apple Cheddar Chili

What better way to finish off the springtime thaw than with some heaping bowls of spicy goodness?

That’s the idea behind Blackstone Valley Tech’s Chili Cook-Off, an annual event in which Culinary Arts students compete to see who can create the best bowl of chili. The contest was founded seven years ago by Culinary Arts Team Leader Chef Matthew Williams as a way for students to practice collaboration, cooking within a specific culinary theme, and working under time constraints. This year’s event was held in mid-May inside the school’s student-run Three Seasons Restaurant and featured seven student-teams serving their takes on classic chili, a non-traditional chili, and a unique salsa.

Alex Burgess of Northbridge and Catherine Tierney of Mendon teamed up to form Team Chili 24/7. Their Southern BBQ Pork Chili was the perfect mix of sweet and smoky.

The Blue Cold Chili Peppers had a hit on their hands after the crowd sampled their Chipotle Sweet Potato Chili. Seen here are Emily Shorey of Northbridge, Kellen Kearnan of Uxbridge, and Julia Graves of Upton 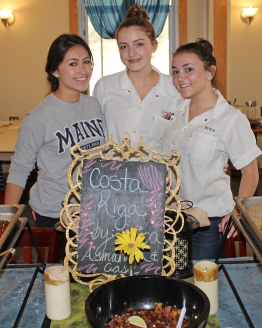