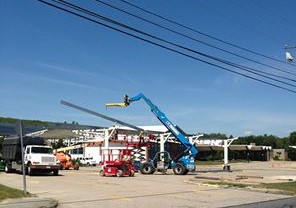 If you’re wondering what all that stuff is at Miscoe you’re probably not alone.

There is a substantial amount of work happening at all four district schools to improve energy efficiency and technology.

“One of our largest jobs, if you’ve driven past Miscoe, is the construction on the solar carports,” said district superintendent Joseph P. Maruszczak at last night’s school committee meeting.

The project is moving along quickly. “Essentially we are at the place where the solar panels are ready to be connected,” said Maruszczak. “We are looking at the completion of all construction by the end of next week.”

Maruszczak said the project will probably need another six weeks after completion to get the final hook up to the meter at the school and approval from National Grid.

“I’m optimistic they will be in operation sometime this fall,” said Director of Finance and Operations Jay Byer. “The only slow down would be National Grid.”

The solar carport along with the solar fields are expected to save the district about $75,000 to $100,000 annually.