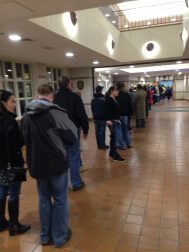 It was a full house for Upton’s November 15, 2016 Special Town Meeting.

Voters soundly defeated Article 18 which was brought forward by petition. The article requested the Town move to increase the Board of Selectmen from three to five members and limit service for members to two terms, six years.

Those in favor of the article said, “The town is growing and there is a greater commitment needed from the Board of Selectmen with regard to duties for service, to other boards, and to other communities.”

Several residents spoke out against the article.

“The Town has been changing since the 1950’s and since that time we have had three selectmen,” said Upton resident Mr. Bates.

Bates said the Town moved away from a Town Administrator format and elected to hire a Town Manager whose job is to handle the majority of the administrative work of the Board.

“Most communities under 10,000 residents do not have a Town Manager. Some have three Board of Selectmen members, some have five. If we are going  to move to a five person Board, should we not consider going back to a Town Administrator,” said Bates.  “I am in favor of retaining a Town Manager position,” he said.

One resident was felt the motion was insulting, especially limiting the number of terms a member could serve. “We have been very well served by our board members and I think it’s a slap in the face for those who have served,” he said.

“We need to focus on encouraging participation in our community,”said Deb L. Deb pointed out many boards aren’t full and other elected positions have gone to the ballot with no one running for a position. “Expansion of the Board and limited terms would harm our Board of Selectmen” she said.

The article failed with a majority vote.

To see what articles passed and failed go here.